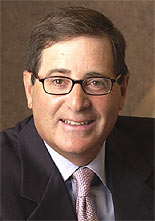 I received my medical degree from the University of Paris, presenting my doctoral thesis (Inotropic support in Septic Shock) in 1980. Following my internship at Beth Israel Medical Center, New York, I completed my general surgery training at Robert Wood Johnson Medical School, New Brunswick, New Jersey (1985) and my cardiothoracic surgery residency at Long Island Jewish Hillside Medical Center in 1987. Returning to Paris for additional training in transplantation and artificial heart, I joined what was then Midwestern Heart and Lung Clinic in Minneapolis, moving to Bloomington with my wife, Linda, and two young daughters.

I developed an expertise in "beating heart off-pump" coronary artery bypass surgery and mitral valve repair, but I enjoy doing the gamut of heart operations.

My interest in medicine was influenced by my father, a general practitioner, in Williamsburg, Brooklyn, with whom I would often make "house-calls" at a time when those were still the norm. Years later, I followed in my father's footsteps, helping patients and trying to make their quality of life better.

Patient ratings and comments
A provider's ratings and comments are only posted if they have a minimum of 30 completed surveys within a 12-month period and they participate in the NRC Real Time patient experience survey with Allina Health. Learn more about the survey.

To verify your specific doctor's or hospital's network participation with any plan, please contact the health plan directly. This information is subject to change and may not be reflected until the next update. We accept many insurance plans, providing access to providers across a wide range of specialties. Learn more.

Other health plans we accept

*PreferredOne and Medicare are not accepted for Penny George Institute for Health and Healing acupuncture services.
Searching...
You'll need to sign in to use this feature.
Sign in/Sign up
Do you want to add your Allina Health MyChart to your account?
Yes
Estimated Wait Time