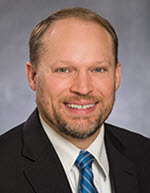 Dr. Fleming earned his degree at University of Arizona College of Medicine, Tucson, and completed a surgical resident at Mayo Clinic's Campus in Phoenix, AZ. He then completed a vascular surgery fellowship at Mayo Clinic in Rochester, MN. In addition, he completed the Managing Healthcare Delivery Program at Harvard Business School. He joined United Hospital in 2016. Previously, he served in roles including Assistant Professor of Surgery and Associate Program Director for the Vascular Surgery Fellowship and Residency at Mayo Clinic College of Medicine, Rochester, MN, where he was named Vascular Surgery Educator of the Year in 2016. During his time at Mayo Clinic Rochester, he spent time with the world renowned Leipzig group in Germany. There he learned advanced minimally invasive techniques for limb preservation.

Dr. Fleming has participated in several clinical trials and has authored/co-authored more than 80 articles and abstracts. He presented his work at conferences in North and South America and Europe, including at the Leipzig Interventional Course (LINC).

In his free time he enjoys activities with his family.

Patient ratings and comments
The patient experience rating is an average of all responses to questions from our NRC survey. Learn more.
Searching...
You'll need to sign in to use this feature.
Sign in/Sign up
Do you want to add your Allina Health MyChart to your account?
Yes
Estimated Wait Time